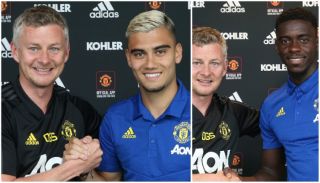 Ole Gunnar has been tasked with rebuilding the Manchester United squad.

A job that could take years to complete, the Norwegian is not only going about it by bringing in fresh talent. He has now tied down Andreas Pereira and Axel Tuanzebe on long-term contracts — with the latter returning from a loan spell at Villa Park and finally looking to break into the United first-team.

As for Pereira, we’ve seen enough of him in a United shirt to pass judgement.

The Brazilian is by no means a top player and I’m not sure there has been enough signs — from him playing at the highest level — to warrant such a belief. Pereira is a hard worker and Solskjaer needs players like that to make up a squad.

Pereira has made 35 appearances for the first time and has signed a new deal to remain at Old Trafford until June 2023.

While United need to sign at least two midfielders this summer, it makes sense to give Pereira a new deal because he will be called upon next term.

Andreas Pereira said, as per ManUtd.com: “I have spent so long in Manchester that I now regard the city and the club as my home and I’m extremely happy to continue my career here. The manager has shown great faith in me and I can’t wait to get this campaign started under him.

“We know that we all have to work hard and that started on day one of pre-season. I will be doing everything I can to help us perform the way we need to, this season and beyond. I also want to thank my family for the trust they have in me and God for the opportunity he has given me.”

Solskjaer also reflected on the news, saying: “Andreas is another player brought through our Academy that understands what it means to play for Manchester United. He came from another country but quickly understood the values of playing for this club and doesn’t take it for granted.

“Andreas has become an important member of the squad with his energy and hard work in midfield. He works non-stop every day in training, has a great character and knows what he has to do to continue his development here. We all look forward to working with him in the season ahead.”

Tuanzebe spent last season on loan with Aston Villa, who went on to gain Premier League promotion with the United youngster playing in the heart of defence. It was his second loan spell at the club, previously playing under Steve Bruce, but now he’s back and obviously hopeful of getting chances in the first team.

The Red Devils are crying out of quality defenders, so next season is his time to shine.

Speaking to the club’s official website about signing a new deal which runs until June 2022, the 21-year-old said: “I have grown up at Manchester United and it has always been a big part of my life and my family’s life. I appreciate the trust that the club has in me and I want to repay that with my performances on the pitch.

No decision reached yet on whether Tuanzebe will stay @ManUtd or go out on loan again. Will go on tour. AT: “I have grown up at Man Utd. Has always been a big part of my life + family’s life. I appreciate trust the club has in me. Want to repay that with my performances."

“I know I have a lot of hard work and learning ahead of me but the experience I gained throughout last season puts me in good stead for the future ahead. I am determined to give everything and show everyone the player that I can be.

“I can’t wait for the tour to get started and to see what the upcoming season brings.”