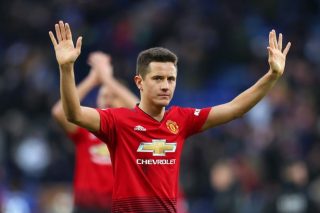 Ander Herrera has taken to Instagram to thank Manchester United fans after signing for Paris Saint-Germain.

The 29-year-old midfielder’s move to the French champions was confirmed yesterday.

Herrera has signed a five-year deal at his new club, and is reportedly set to earn around £350,000 per-week (Guardian).

Despite not being able to agree fresh terms to stay at Old Trafford, many fans still adore the Spaniard for his passion and commitment he displayed in a red shirt.

United clearly also has a special place in Herrera’s heart as he thanks fans for their supportive messages.

Meanwhile, Herrera’s exit means the Reds require two midfield signings this summer. Solskjaer has identified Bruno Fernandes and Sean Longstaff as targets (Sky Sports), but no deals look imminent with the club set to fly out on the pre-season tour to Australia next week.

Herrera: "Thanks to all united fans that are wishing me the best in my new Chapter, you are still supporting me even when I am not at the club anymore, thanks a lot from my heart, I have no words.” #mufc [Ig] pic.twitter.com/AAUVwi4SUr