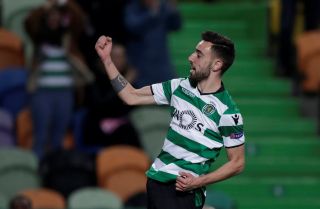 Bruno Fernandes is a player plenty of Manchester United fans would love to see at Old Trafford next season.

The Portuguese international has been heavily linked with a move away from Sporting Lisbon all summer, with Tottenham, Liverpool and United all said to be interested.

The latest from Sky Sports is that United have been told they will need to pay at leat £50m to sign the 24-year-old midfielder.

Solskjaer is said to be interested in signing Fernandes to boost his midfield options following the departure of Ander Herrera and the potential exit of Paul Pogba.

Fernandes, who scored 32 goals in 50 games for Sporting, could be a perfect addition to add much-needed creativity in United’s attack.

The video below displaying Fernandes’ highlights last season shows just how good a finisher the midfielder is.

United can take however long they want on any other deals just get Bruno Fernandes done! He would add so much to our midfield and would mean we wouldn’t have to rely so much on Pogba in terms of creativity. #mufc pic.twitter.com/qfS7X6ZmWe