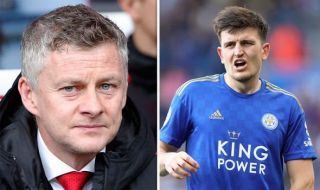 That’s according to the Mirror , who claim Three Lions teammates Ashley Young, Chris Smalling, Marcus Rashford, Jesse Lingard and Phil Jones were all questioned on Maguire and how his personality would fit into the current United set-up.

The report states that responses were all positive, giving the United boss the green light to prioritise the Leicester City defender.

The Mirror claim the 26-year-old is Solskjaer prime defensive target, with the club offering £70m for the England international.

It seems the United boss was keen to find out more about Maguire before splashing huge amounts. Solskjaer wants players who fit the club’s mentality off the pitch, as well as having the necessary talent on it.

Maguire has proven himself in the Premier League and is arguably England’s best centre-back at the moment. It would take a huge fee to secure this transfer but it is an area that has needed addressing for some time now and Maguire may be the best available option.

The Reds will have to fight off competition from Pep Guardiola’s Manchester City who are also said to be interested in the defender.