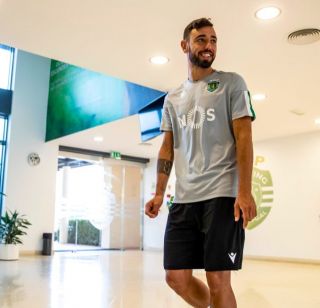 Sporting Lisbon midfielder Bruno Fernandes has arrived  for the start of the club’s pre-season training.

The 24-year-old is back after helping his Portuguese national side win the inaugural Nations League in Porto this summer.

Fernandes has been heavily linked to the Reds this summer, as well as rivals Tottenham and Liverpool.

Manager Ole Gunnar Solskjaer was said to want all his targets signed before the club fly out for their pre-season tour to Australia next week and Fernandes is reportedly on the Norwegian’s list.

Sky Sports report that Solskjaer is keen on Fernandes, but Sporting are holding out for £50m for their star man.

Fernandes would be a fantastic addition following the arrival of Daniel James and Aaron Wan-Bissaka if the Reds can agree on a fee for the midfielder.

Fernandes has fantastic ability to create chances and is also a goal-threat from midfield. The Portuguese international scored 32 goals in just 50 matches for his side last season.

This photo shows that any move for Fernandes to Old Trafford does not look imminent, but we hope negotiations are successful and the Reds sign the 24-year-old this summer.