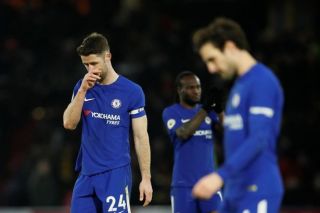 We know we are struggling to sign a centre-back this summer, but this is now a step too far.

Cahill was released by Chelsea at the end of the season, and only managed two league appearances under manager Maurizio Sarri.

But Connolly believes the 33-year-old’s experience would be useful at Old Trafford.

“There are deals out there, Alderweireld is available for £25million and Gary Cahill has just gone on a free,” Connolly said as quoted by the Express.

“Now, what harm would it be to take a Gary Cahill, with all his experience and winners’ medals, into the building? It’s that experience, you might have lost a lot, well get someone in that would give that!

“Look, he’s not going to bring the ball out from the back like if they had a Harry Maguire. But he’s a top, top centre-half who looks as fit as a flea.

“Obviously he hasn’t played that much, but he looks after himself. So why not someone like that?”

It’s pretty obvious why the Reds shouldn’t consider bringing Cahill to the club this summer.  Manager Ole Gunnar Solskjaer is looking to the future looking to sign young, talented players with potential. Why would a 33-year-old who was deemed no longer good enough by Chelsea be good enough at Manchester United?

In fairness, Connolly raises a good point that Tottenham defender Alderweireld is available for just £25m. If United can encourage the Belgian to move to Old Trafford this would be a no brainer given the player’s quality and Premier League experience.