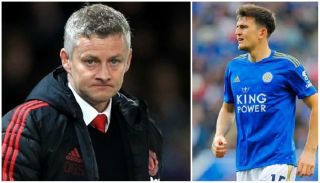 Manchester United manager Ole Gunnar Solskjaer has been a fan of Leicester City defender Harry Maguire for a while now.

The Reds played Maguire’s Leicester in February, coming away with a 1-0 victory thanks to Marcus Rashford’s first-half strike.

Things were far rosier then for Solskjaer, with United were winning game after game during the Norwegian’s early spells in charge.

Interestingly, Solskjaer singled out Man Utd target Maguire after the victory for praise.

“I think that Harry Maguire has got a magnet on his head because it nearly always drops to him, “he said as per the Metro.

“A fantastic player in the box. So we knew we had to defend against him and out lads, they blocked, put their bodies on the line so it was a fantastic effort and they were fighting for each other.”

The Reds need a defender the summer and it looks like the 26-year-old England international is the United manager’s prime target.

According to Sky Sports, the Reds have already had a £70m bid rejected by Leicester for the defender, who still has four years left on his current deal.

The fee quoted for Maguire seems excessive but the Reds must strengthen in defence this summer and the Englishman may be the most attainable option.