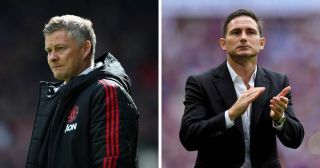 Chelsea have now confirmed that Frank Lampard has signed a new three year deal as manager.

Lampard has left Derby County, whom he came close to being promoted with last season but lost in the play-off final to Aston Villa.

Lampard’s first Premier League game as Chelsea boss will be at Old Trafford where he will come up against United manager Ole Gunnar Solskjaer.

Rather like Solskjaer, Lampard has been given his dream job at Stamford Bridge and it will be interesting to see how his team line-up against the Reds come the start of the season on the 11th August.

Both men are  inexperienced in such big jobs, and Lampard will also have no room to strengthen given the club’s transfer ban.

Its crucial Solskjaer can get one over on Lampard at Old Trafford to start of the season, in what could be an intriguing tactical battle between the two sides on the opening weekend.