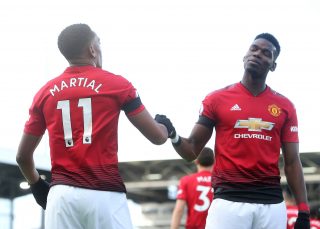 Martial scored just 11 goals for the Reds last season, but the former United striker believes the Frenchman can still improve, under the guidance of Solskjaer.

“I’m not the coach. So it’s not my job to say that. But I think the strikers are good enough. I like them, especially Anthony Martial, because I used to play with him in Monaco. I know how good he is,” said Berbatov as quoted by Manchester Evening News.

NEXT:Inter warned by agent to speed up Lukaku transfer

“And I think he can be even better with the right training sessions, with the right attitude, and with the right guidance from the manager Ole Gunnar Solskjaer. Because he was a striker, one of the best in the world, so you can go easily to the manager and ask for advice like how to score, how to move, how to round. So to be honest, I don’t think they need someone new in the front line.”

This is a huge season for Martial to silence his critics. The 23-year-old has had his attitude questioned at times at Old Trafford and has yet to fulfil his potential after an excellent breakthrough season under Louis Van Gaal, including the unforgettable goal to seal victory over Liverpool.

Martial must hit the ground running this time out and will face new competition in the shape of signing Daniel James. Fans know just how talented Martial is, but he must prove himself with consistent performances when given the chance by Solskjaer, whether it by out on the left wing or up front alongside Marcus Rashford.

As for Berbatov’s comments about not needing someone in the front line, this is not the case if Lukaku departs for Inter Milan this summer. This would leave another gap in the squad that the Reds must address before the start of the new campaign.