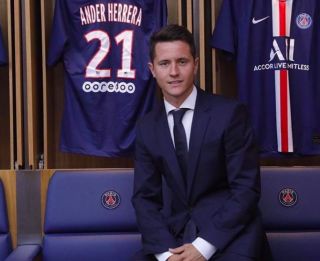 The 29-year-old departed the Reds at the end of the season, and thanked the club and fans for his chance at Old Trafford.

Unfortunately United could not agree terms to extend the Spaniard’s stay at the club; Herrera was an important part of the midfield and brought tenacity which very few in the current squad have.

“Paris Saint-Germain is the greatest club in France,” he told his new club’s official site.

“It keeps on improving and competes to win every possible title. I was looking forward to coming to Paris and to wearing those colours. I hope to continue to make history with the club!

“Joining this club is an amazing feeling. I also love the city. Paris is the most beautiful city in the world.”

Herrera also guaranteed three attributes he will bring to the Paris Saint-Germain side.

“I promise three things: work, professionalism and passion” he added.

United fans won’t be able to argue against these three assets which Herrera had in a red shirt. The Spaniard’s quality on the ball was questioned at time but his passion and desire was always adored by us reds.