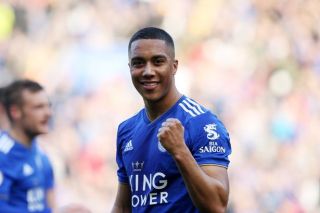 Manchester United need to get their act together and progress on deals for a central midfielder or two.

Tottenham have just completed the transfer for Tanguy Ndombele from Lyon and United could now be at risk of missing out on Youri Tielemans too.

The latest arrival at White Hart Lane was briefly linked with United this summer, but there were never any doubts about where he’d end up with Mauricio Pochettino prioritising the Frenchman to bolster his midfielder.

The Red Devils have not yet made a bid for the Belgium international, who showed that he has what it takes to play in the Premier League during his short loan spell at Leicester City last season.

Tielemans is said to be keen on a potential United switch, but Leicester are in pole position because they’re actively trying to make the deal happen. We’d want to get our move on soon if we Ole Gunnar Solskjaer decides to sign the AS Monaco midfielder.

Belgian football expert Kristoff Terreur told Sky Sports that Tielemans would prefer a move to United if an offer is tabled by the 20-times champions of England.

Terreur adds that Solskjaer is an admirer to the equation, saying: “If a club like Man Utd comes in where you can play European football, which is always very important for continental players, they can offer him that so he might rethink. He knows that Solskjaer rates him so he feels that the manager likes him.”

Perhaps Tielemans should take warning from the Harry Maguire situation, with Leicester City rejecting a £70m bid for the defender only to demand more, as per Sky Sports.

While the Foxes are in their right to demand any transfer fee they wish for any player under contract at the King Power Stadium, Tielemans may see the club as a stepping stone to a bigger club in the future. Now he knows he could do everything in their power to make that more difficult.

He netted three goals and provided four assists last season in 13 Premier League games. You’d think if it was a matter of Solskjaer liking Tielemans, and Tielemans liking United, that leaves just Ed Woodward to get involved.

Tielemans was linked with a move to Old Trafford last month, as reported by The Independent, but we’re still waiting for a deal to materialise.