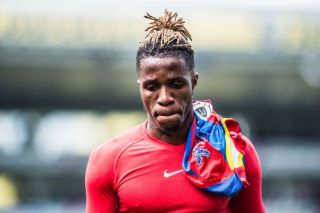 According to ESPN, Crystal Palace winger Wilfried Zaha ‘would prefer’ to join Arsenal rather than return to Manchester United this summer.

The Ivory Coast international experienced a difficult spell at Old Trafford six years ago. He didn’t see too many opportunities with the Red Devils and eventually ended up back at Selhurst Park in 2015.

He came as Sir Alex Ferguson’s final signing but never had a chance to work with the Scot because he returned to Palace on loan and helped them clinch promotion back the Premier League. Then David Moyes came in and didn’t seem interested in working with Zaha.

Zaha managed to get his career back on track with Palace and is now recognised as one of the Premier League big-hitters.

Arsenal have reportedly submitted a £40m bid plus add-ons for Zaha, as per Sky Sports, which seems ridiculously low when he’s Palace’s best player and they proved difficult negotiators for United with the Aaron Wan-Bissaka deal taking a long time to solve.

But should United decide to make a move for Zaha again he would opt for Arsenal instead as he wishes to remain in London for family reasons, ESPN FC sources claim.

Ole Gunnar Solskjaer took Zaha on loan at Cardiff City and is understood to have a good working relationship with the skilful winger.