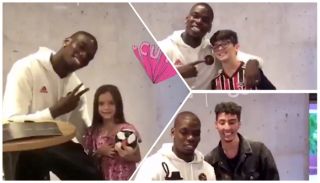 Stepping away from the transfer train of speculation, Paul Pogba took some time out to meet fans during his holiday in New York.

The Manchester United midfielder has been heavily linked with summer moves to Real Madrid and Juventus, and the Daily Star claims he will meet with Ole Gunnar Solskjaer for crunch talks this week.

It is understood that Pogba no longer wants to be at United and believes his loyalty last season warrants a summer transfer, but United don’t need to act because the player is still under contract for the foreseeable future.

READ MORE: Opinion: Selling Diogo Dalot would be a mistake, Man Utd would be foolish to give up on promising youngster

The MEN Twitter account for Manchester United news shared a video of Pogba meeting a number of fans in New York whilst signing football shirts and footballs.

Pogba didn’t look distracted by talk about his future as he smiled with those in attendance.

Solskjaer will hope he can convince the France international to remain at Old Trafford for at least one more season, and the club is adamant he’s not for sale.

It will be interesting to see what comes of these crunch talks between the pair.