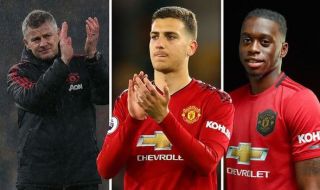 The England U21 international was one of the standout right-backs in the Premier League last season and being so young and talented, Ole Gunnar Solskjaer was prepared to spend big money on the Palace ace.

Now Wan-Bissaka is on a quest to get better and to become one of the best full-backs in the world. He also needs to earn his first senior cap for England, which will hopefully come at some point next term as he proves himself for the Red Devils.

He’s defensively sound and uses his reading of the game and his long legs to recover from any difficult situation. Wan-Bissaka covers lots of ground but could do with improving his game going forward.

Dalot joined United last season as José Mourinho took the Portuguese youngster from his former club FC Porto. It took some time to see him in action because he underwent surgery and needed time to recover.

During his first season at Old Trafford, Dalot played as a right-back, left-back, right wing-back and a righ winger which tells Solskjaer a lot about the player’s versatility.

His high point of the season came in the Champions League quarter-final second leg against Paris Saint-Germain, when he won a penalty in the dying seconds only for Marcus Rashford to score and send United into the next round.

Dalot wasn’t consistent throughout the season but showed glimpses of what he can do on the pitch, and there is plenty of promise for the future I can’t help but feel United would be making a mistake if they were to consider selling him.

The 20-year-old has raw potential but he needs game time and opportunities to develop.

Signing Wan-Bissaka may rule out Dalot’s chances of being United’s future right-back, but he can play further up the pitch and Solskjaer was trialling that towards the end of last season.

Dalot has a long way to go but has impressed during his short time at the club. It wouldn’t make sense to get rid of him now, especially after forking £19m out to sign him last year, as reported by Sky Sports.

We’ve gone from being very light at right-back to having two promising prospects willing to fight it out for a starting spot. Wan-Bissaka will take that, but Dalot can use it to his advantage and should let it drive him on towards clinching another role in the team.

It may be worth considering Dalot as a winger next season — against certain opponents — if Wan-Bissaka doesn’t get better going forward. That’s one area of the Portuguese kid’s game you can’t slate.