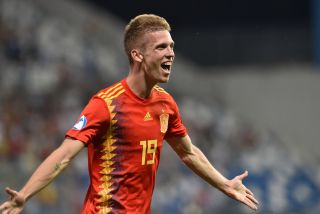 Dani Olmo has responded to rumours linking him with a transfer to Manchester United this summer.

The highly-rated youngster, who was part of Spain’s European Under-21 Championships winning team this year, is subject of a £36m bid from United, as reported by Sportske Novosti.

Olmo fits the profile of player Ole Gunnar Solskjaer is trying to re-build his United team with because he’s young and is potentially the type of player who will get you up of your seat.

Premier League rivals Arsenal and Liverpool were also mentioned in the report as admirers of Olmo, so this could spring a bidding war of some sort.

But it seems Olmo doesn’t know anything about a potential offer from United. He says he will leave these matters (transfer dealings) to his Dad and his agent.

‘Honestly, I know absolutely nothing about it. It’s for my manager Andy Bara and my dad. However, I’m not burdened by this,’ he told T-Portal, as translated by the Metro.

He doesn’t rule out a summer switch which should tell potential suitors he is open to a move.

I mean, of course he is. Who wouldn’t leave Dinamo Zagreb for one of the world’s biggest clubs?

Olmo came through the Barcelona academy so has plenty of pedigree.