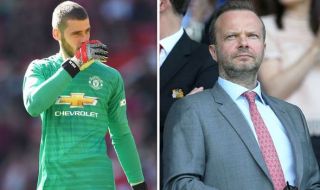 According to The Times, Manchester United have offered a new 5-year contract to David de Gea that is worth in excess of £350,000-per-week.

The keeper is currently on £200,000-per-week on his current deal, which is due to expire next summer when United will be fearful of losing their star goalkeeper on a free transfer – if he doesn’t agree to fresh terms before then.

Real Madrid are forever linked with a move for De Gea, but we’ve finally reached a point that they don’t need to sign a goalie. That leaves Juventus and Paris Saint-Germain as the only options for De Gea and those links have never been as persistent.

The report notes how United began talks with De Gea over a year ago, yet to find an agreement that suits all parties. Apparently the Spaniard feels he deserves in or around the same as Alexis Sanchez, whose wage amounts to around £390,000 per week.

That’s savage money – daylight robbery as far as Sanchez is concerned – but United are determined to keep their goalkeeper. They know it won’t be easy to find one as good.

United have given De Gea plenty of time to make a decision on his future and will probably continue to do so, but we need to come to some sort of a conclusion soon. If we’re going to need a new keeper next year our planning should begin now.