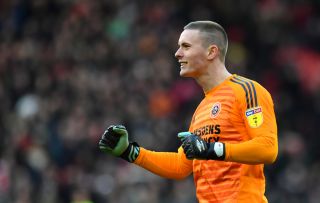 The 22-year-old goalie came through the United academy from 2011 onwards after joining from Carlisle.

However, with David de Gea owning the first choice keeper slot at Old Trafford, the England U21 has been sent out on a series of loan spells.

He went from being named in the League One Team of the Year last year after a spell at Shrewsbury to a heroic Championship campaign with Sheffield United, which saw the club promoted to the Premier League. He started all 46 of their league games and kept 21 clean sheets.

The biggest benefit of sending Henderson back to Bramall Lane is that he will be playing top flight football and United boss Ole Gunnar Solskjaer will then have a better idea about him being good enough to be our first choice one day.

We will then see him regularly come up against the top strikers De Gea has to deal with each week and gain a different perspective on potentially replacing the Spaniard with someone other than the few options we’re constantly linked with, such as Jan Oblak who would cost a fortune.

Sergio Romero is still considered a strong second choice goalkeeper at the club.

And, by the sounds of it, Henderson is too good to be third choice at any club. The last thing we want is to stunt his progression as a player.

Blades gaffer Wilder spoke to Mark Walker of the Press Association, providing the latest on talks between the two clubs.

Henderson won’t get the game time he needs at United next season and might not even get it the following season!

The club is likely to allow him leave on loan and hope that he continues to develop into a fine shot-stopper.

You can never have enough good goalkeepers.