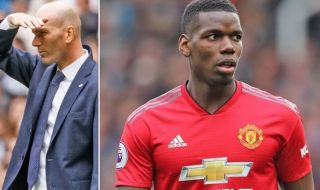 It sounds like Manchester United will put up a fight to keep hold of Paul Pogba, despite ongoing links to Real Madrid and Juventus.

According to Spanish outlet Marca, Real Madrid are willing to offer Gareth Bale in exchange for the France international, but United won’t negotiate a transfer.

It sounds like United are refusing to reply to offers and other means of communication as a giant middle finger to the powers of Real Madrid.

READ MORE: John Giles: ‘Roy Keane would do a better job at Man Utd than Solskjaer’

The United board appear to be refusing to engage in talks over Pogba departing which suggests a hardline stance that they will not sell him this summer.

Whatever your views are on Pogba and his future as a footballer, it’s a relief to see United refuse to let Real Madrid or any club walk all over them.

Pogba is contracted to Manchester United and needs to respect his current deal. While he may want to engineer a move away elsewhere, we’re the ones paying his wage every week.

As for Bale, he is under contract at Real Madrid until June 2022, which could see the Spanish club try send him out on loan just to get his €15m-per-year salary off the books, as per Foobtall Espana,

“The information that has been said is not true,” Jonathan Barnett is cited by El Mundo Deportivo as telling Interdependenza.net.

But even offering Bale at this stage should be seen as an insult. Real Madrid wouldn’t talk to us when we enquired about him in the past, so why would we listen to them now?