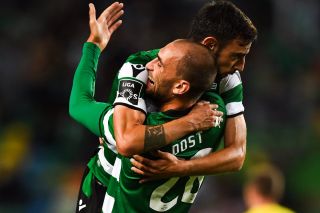 New contacts today between #ManchesterUnited and #BrunoFernandes’s agent. #RedDevils have an agreeement with them and now want to finalize the deal with #Sporting. #transfers #MUFC #mutd

He claims the club’s representatives held talks with the player’s agent on Monday with personal terms agreed, and negotiations with Sporting Lisbon to follow.

Schira’s reliability as a journalist comes under question here and we’re looking forward to seeing how it plays out. Fernandes would be a good signing and a lot of rubbish does the rounds during the transfer season.

The Portugal international attracted interest from United and the likes of Tottenham and Liverpool after a brilliant 2018/19 campaign. He scored 31 goals and made 17 assists in 50 appearances last term, the sort of numbers you’d like to see from a midfielder at Old Trafford.

Fernandes would bring some much needed creativity to the United attack and he’s not afraid to shoot from distance. Goalkeepers coming up against the Red Devils will be kept busy if he’s around next season.

L’Equipe claim Tanguy Ndombele is in London for his Spurs medical. Can’t see them buying him & meeting Bruno Fernandes’ valuation. Liverpool said to be out of the running too. 😏 pic.twitter.com/6CCnxpvdYh

Lots of goals, too. Hopefully!