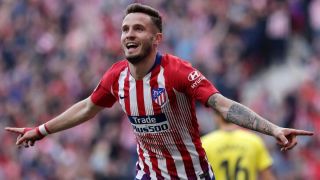 Manchester United are reportedly considering Atletico Madrid midfielder Saul Niguez as one of their options to strengthen in that area of the pitch for next season.

The Red Devils need to upgrade on Nemanja Matic and they will also be hoping Fred has a better season than last term, when the Brazilian looked out of sorts following his move to the Premier League.

Moreover, the departure of Ander Herrera also leaves a hole to be filled.

The state of United’s midfield only strengthen’s the view that Solskjaer needs three (two at least) midfielders this summer.

But the club will also have a long list of alternatives – or players they wish to consider in more detail than others. Saul is apparently on that list.

The 24-year-old wouldn’t come cheap, with AS previously reporting on his £134m buy-out clause.

Saul was linked with a move to Premier League champions Man City in that report, which states they’d need to pay his release clause in order to sign him.

It remains to be seen whether United will go that far to land Saul this summer.