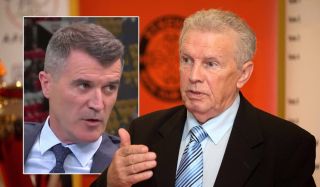 Keane last week quit as assistant manager to Martin O’Neill at Nottingham Forest after just five months, days before O’Neill himself was sacked by the club, and the former United captain may be looking for a route back into management.

Speaking on The Stand podcast with Eamon Dunphy, Giles said Keane woud be better suited to the United post than Solskjaer, who signed a three-year contract with United last March after impressing as caretaker manager.

Gill questions Solskjaer’s position, saying (via Irish Independent): “I’d put my money on him [Keane] at Manchester United before Solskjaer.

“He should be dominant at the moment to get this thing right for next season.

“There’s still a lot of talk. Is Rio Ferdinand going to come in now as a director of coaching or director of football? There’s all that stuff going on at Manchester United at the moment. And Solskjaer hasn’t been mentioned.

“I honestly think if Roy Keane went to Manchester United now he would do a better job than Solskjaer with what’s needed now. They might need that type of thing.”

We’re all entitled to our views and even as someone who adores Keane, I don’t think it would be a very clever idea appointing him as a manager anytime soon.

I don’t think he’s cut out for it or knows how to handle young players at this level.

Keane was an exception even when he played and needs to come to terms with that.

Then again, I do agree with Keane’s view on coaching that it’s the coach’s job to better the players, but it’s the players fault to motivate themselves.

Dunphy spoke of how Keane found the strength to give up the drink during his playing days at Old Trafford.

“When he [Keane] used to drink he could be aggressive and get into trouble,” said Dunphy.

“On one occasion in Manchester, the players went out for drinks and he ended up in a cell. Ferguson got up and went into the centre of Manchester and got him out of the cell and took him home.

“To Roy Keane’s great credit, as someone who had a problem with drink, he stopped. And the problem stopped. He said one of the shocking things for him was Cantona and Laurent Blanc coming to play with United.

“He said that in the old days with the Bryan Robson gang, they’d get back to Manchester after a match at 9.30pm. They’d be in their cars and straight to the pub.

“All of a sudden, Laurent Blanc comes, Cantona comes, they get back to Manchester and they’re all in their cars and going home.

“They wouldn’t even have a drink on the coach like a bottle of beer. He said that was a kind of culture shock but he learnt from that and was impressed by it, which was interesting.”