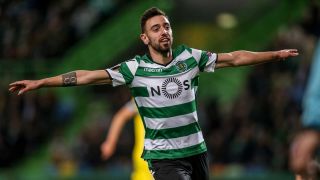 Reports there’s an agreement between Manchester United and Bruno Fernandes have reached an agreement have been knocked back by Northern Football Correspondent at the Telegraph, James Ducker.

This comes a day after Gazzetta dello Sport journalist Nicolo Schira revealed some information on the potential transfer which could see the Sporting Lisbon playmaker move to Old Trafford this summer.

He’s exactly what United need in midfield being a constant goalscoring threat.

Schira claims United held talks with the Fernandes’ agent on Monday with personal terms agreed, and negotiations with Sporting to follow.

New contacts today between #ManchesterUnited and #BrunoFernandes’s agent. #RedDevils have an agreeement with them and now want to finalize the deal with #Sporting. #transfers #MUFC #mutd

But Ducker, who we deem reliable, says not meetings have took place and there has been nothing agreed as of yet.

No new developments on Bruno Fernandes. There hasn’t been a new meeting between #mufc and his representatives, he hasn’t agreed personal terms with the club either

This is why it’s important to source information. You just don’t know what to believe, though Ducker’s line is the one to take on the Fernandes front.