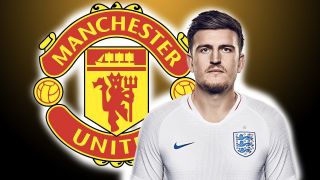 Manchester United have upped their bid to £70m for Leicester City defender Harry Maguire, according to Sky Sports.

It is noted that Man City are also interested in the centre-back, but United have took advantage with their opening offer for the England international.

Maguire – along with a list of defensive targets – has been on United’s radar for over a year, so they should know exactly what they will be getting should he join the club this summer.

He became an option last summer when José Mourinho was crying out for defensive reinforcements but Ed Woodward was unable to bring in a single centre-back. Now Ole Gunnar Solskjaer is trying to fix that mess up as well as others.

Like any piece of transfer news, football fans in their droves jumped to the nearest device to tweet from.

Here’s how United fans are reacting to news that the club has placed a £70m bid for Maguire. It’s pretty mixed to say the least:

I’ve wanted Harry Maguire (26) since last season, quality centre-half. 70m? He’s definitely not worth that, I value him around the 55m – 60m mark but when you’re shopping in the league, you have to pay a premium fee. I really want this deal to happen. Will Leicester accept?

Thoughts on Harry Maguire, a thread:

Yes, £70million is expensive, but #mufc would be significantly improving their centre-back options. From day one, he’d be the best defender at the club. pic.twitter.com/2h7OvWmFbO

If United land Harry maguire, surely Smalling and Jones have to go?

Not convinced by Harry Maguire. Think United should be looking at better defenders, especially for the £70m bid placed, according to @SkySportsNews. Feels like they’ve based this move solely on Premier League experience, though Mick Phelan worked with the CB at Hull City.

Harry Maguire can easy walk into our starting 11.. your deluded if you think otherwise.. #mufc #GlazersOut

I’d much rather give Tuanzebe, Bailly & Rojo a chance this season than pay £70m for Harry Maguire #mufc