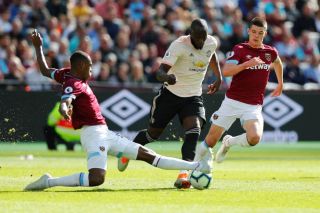 Manchester United are reportedly set to launch an offer expected to be worth at least €50m for West Ham defender Issa Diop.

It’s not the first time there’s been talk of the Red Devils making a move for Diop, with a report coming from the Daily Mirror.

Now there are suggestions talks have taken place with Diop’s entourage which has allegedly led to United preparing their opening bid for the player, according to L’Equipe, as translated by Get French Football News.

Boss Ole Gunnar Solskjaer needs to address the team’s faults in defence. He doesn’t have a strong centre-back pairing at the club which becomes a serious issue whenever David de Gea goes from being Superhuman to plain old human.

This rumour follows another welcome claim by the Daily Mirror that United have ended their pursuit for Leicester City’s Harry Maguire because he was too expensive. The Foxes were demanding around the same fee as what Ajax want for skipper Matthijs de Ligt!

Diop may be a cheap alternative to Maguire, but he would make a better long-term addition.