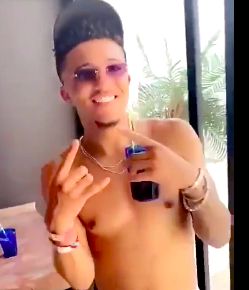 Borussia Dortmund winger Jadon Sancho has been filmed holidaying with Man Utd fans Harry Pinero and rapper Dave ahead of the new season.

The snapchat video below shows Sancho jokingly being encouraged to join United this summer.

Pinero says that the pair are ‘in talks’ with the Sancho to move to Old Trafford this summer, which the England international seems to shrug off with laughter.

Sancho is one of the best young talents in world football at the moment, and it would cost huge money to sign the 19-year-old.

The Telegraph reported that the Reds still maintain interest, despite not being able to offer Sancho Champions League football this season.

Perhaps this is a move United can pull off next year, with the help of these enthusiastic fans and budding agents below!