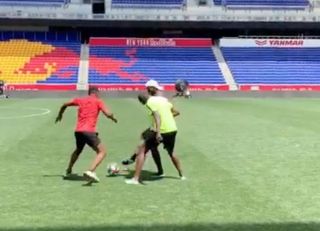 Paul Pogba has shown off his skills on his latest Instagram video as he continues to work on his fitness ahead of the new football season.

We don’t know whether Pogba will be at United for the new season, with the midfielder’s future still very much up in the air at the moment.

The World Cup winner has been linked with moves to Real Madrid and Juventus this summer, but United are not actively trying to sell its most valued asset.

He has been holidaying in New York while updating his Instagram followers on his intense training sessions.

Ole Gunnar Solskjaer wants his players to be in peak physical condition when they return to the club after the summer break and it looks like Pogba took note.

See the clip below as Pogba trains on the pitch at the Red Bull Arena in New Jersey. The France international challenges two of his friends to try take the ball off him.