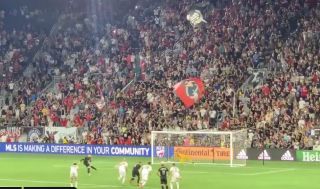 Stand me under a beer shower and make it like this one.

The DC United fans positioned behind the goal couldn’t contain their excitement and surprised fellow fans, most beneath team, with a shower of beer.

A number of fans were seen throwing their beers in mid air when Rooney’s equalising penalty against Toronto hit the back of the net.

I’ll have one of those beer showers please! @dcunited pic.twitter.com/RAYZpO5Toq