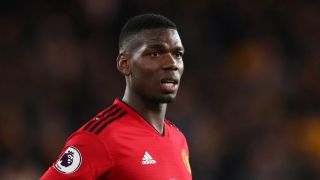 Beginning to wonder whether Paul Pogba will ever get his ‘dream’ transfer to Real Madrid.

Or if he’ll just have to settle for little old Manchester United? Bless his cotton socks.

While Paul Pogba is wanted by Real Madrid, it has been reported that they have advanced their pursuit for one of their cheaper transfer alternatives.

United have set a huge price tag to try and prevent the move from happening, but also to ensure that they make a profit on selling the World Cup winner.

According to AS, an official bid has been tabled to Ajax to try and bring Donny van de Beek to the Bernabeu.

This could be positive news for United boss Ole Gunnar Solskjaer, especially if Real Madrid cool their interest in Pogba and sign the Dutch youngster.

Last term saw Ajax become one of Europe’s fiercest sides as they reached the Champions League semi-finals with a team of young hungry players.

One of the biggest names to emerge from the Ajax side of last season is Matthijs de Ligt, captaining the team at just 19, and he looks set for a mega-money transfer to Juventus this season.

Hopefully they can still give the Champions League a go next season without losing all of their top players.