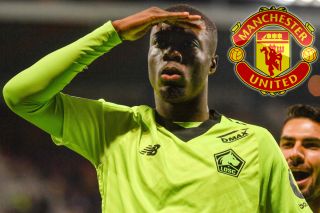 In an analytical article, talkSPORT take a look at a range of Ligue 1 players who could make a difference to teams in the Premier League.

The report lists one player from the top-flight division in France who would be a good signing for each of the Premier League teams.

Footballers have made the jump from France to England plenty of times in the past, with some more successful than others. Petr Cech, Michael Essien, Patrice Evra, Robert Pires to name some of the better ones.

The sports station talkSPORT suggest Memphis Depay for Liverpool, a transfer that would cause a stir given the Netherlands winger’s past at Old Trafford.

But in return talkSPORT look to another winger for the Red Devils. He’s got higher stock than Memphis at the moment and has been strongly linked with a summer move to Bundesliga giants Bayern Munich, with The Sun claiming they were set to strike a deal one month ago.

Lille winger Nicholas Pepe has been a reported Manchester United target in the past, but talkSPORT go further to claim he would be a good signing for Ole Gunnar Solskjaer, who is looking to rebuild the side with young, hungry and exciting players.

He’d balance out the squad, which very much favours the left wing, and provide them with attacking quality they lacked.

The £70million fee is steep but not unrealistic and with Timothy Weah joining Lille an exit is almost certain.

The Ivory Coast international fits the profile, although we are not confident of him coming to United this summer.