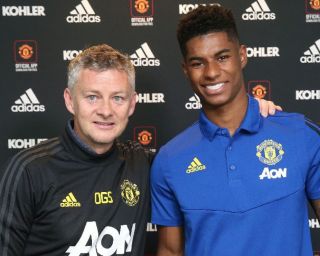 Marcus Rashford has signed a new contract at Manchester United, keeping him at the club until 2023.

Rashford’s deal is worth £200,000 per-week (BBC), and the Reds have the option of a further year extension.

Manager Ole Gunnar Solskjaer was thrilled to keep the 21-year-old at the club for another four years.

“Marcus is one of the most talented English players of his generation. He is an outstanding player; blessed with natural pace and energy,” Solskjaer told ManUtd.com
“Marcus is a shining example of the talent that our Academy produces and his upbringing means that he truly understands what it means to play for Manchester United.

“Despite being only 21 years old, Marcus already has great experience. He has a fantastic future ahead of him with the club and I am delighted that he has signed a new contract.”

Solskjaer clearly has huge faith in Rashford after consistently choosing the youngster to lead the line for the Reds last season. Rashford’s form dipped towards the end as the season ended in a whimper but we hope the striker can hit the ground running next season.

The upcoming season is a huge chance for Rashford to prove to fans he has what it takes to be United’s first choice number nine. Despite the player’s youth, Rashford has already earned 170 appearances for the Reds and must now kick on and score 20+ goals next campaign.