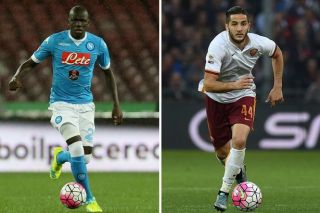 Manchester United have been given a slight boost in their pursuit of Kalidou Koulibaly after Napoli secured a £32m deal for Roma star Kostas Manolas.

The Greek centre-back, 28, will be playing under Carlo Ancelotti next season (via Marca) but had also been linked with a move to Old Trafford in the past.

This news could put the Red Devils in with a greater chance of signing Koulibaly, who is valued at £85m by Napoli owner Aurelio De Laurentiis, as per The Sun. He is without question Napoli’s most valued asset and Ancelotti will want to keep hold of the defender regardless of any incomings.

Koulibaly dropped a transfer hint last week when asked if he’d still be at Napoli next season, telling Goal: “I don’t know. I think so.

“But I have to play the AFCON and then after that I’ll go back to Napoli.

“Everyone’s speaking about me, but I’m only speaking about Senegal, because that’s my objective today and I want to achieve something big with Senegal.

“I don’t want to talk about my future today. I’m relaxed, I want to focus on the AFCON and after that return to Napoli and we’ll see what happens.”

And, it should be noted that Manolas’ arrival is not seen as a replacement signing for Koulibaly. Raul Albiol is returning to La Liga with Villarreal, and the Greece international will come in to as Koulibaly’s new partner in the heart of defence.

While this doesn’t exactly help United’s crisis in defence, they should make an offer for Koulibaly and at least test the waters.

Napoli can either accept or reject – and it could go a long way towards turning the player’s head.

Give me Koulibaly with one leg over a fully fit Harry Maguire.