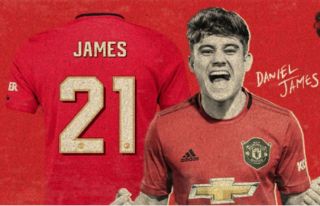 Manchester Evening News reporter Rich Fay spotted that the official Manchester United online store is selling Daniel James shirts with the number 21 on the back.

Reports from Football Espana claim Ander Herrera will be announced as a Paris Saint-Germain player today, after seeing his United contract expire this month.

It looks like new signing James will take squad number 21, previously worn by Herrera, with the club taking orders for the shirt online.

Fay was first to the news, though there’s been no actual confirmation from the club as of yet.

James is unlikely to sell the most shirts for United this year, with the club working on bigger names than the former Swansea City winger. He’s coming from a Championship side and only recently broke into the Wales national side.

But the sky is the limit for James. He’s a young player with bags of potential, and at United he should be allowed to blossom into something better.

We don’t think this is a sign James is set to deliver our 21st Premier League title this season, but that would be nice. Wouldn’t it?