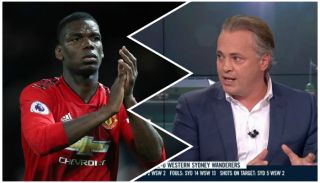 Pogba has been strongly linked with a transfer away from Old Trafford this season, with growing speculation that the French midfielder could be on his way to either Juventus or Real Madrid.

While United are a better team with Pogba than they are without, I think most fans wouldn’t be too downbeat about losing him this summer. He’s good but hasn’t shown his best in a United shirt.

It’s different when he plays for France whatever the reason, but if his dream is to play for Real Madrid and he no longer wants to be at United, what’s the point in keeping Pogba?

You shouldn’t have to beg a player to stay at Manchester United because they’re not worth the hassle the minute they consider being elsewhere.

Bosnich either strongly disagrees with that or wants to pretend Pogba will be happy to stay at United.

“In terms of Pogba, and I feel very strongly about this, I would build the team around him,” Bosnich told talkSPORT.

“I think what they’ve got to do is look at where Pogba has been most successful, at Juventus and at the World Cup, and who was playing with him? Well, at the World Cup it was N’Golo Kante and Blaise Matuidi.

“So, if you’re looking for players, either look to bring those two in with him, or players of that ilk to play alongside him and bring the very best out of him.”

But that’s still a big risk because Pogba isn’t exactly pulling up trees or showing any evidence he can with the players already at the club.

What Bosnich is saying must be based on something! Not something he dreamt in la la land.

And, do you really think Chelsea would see Kante to United?!