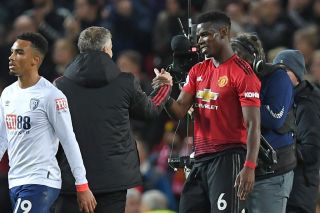 Paul Pogba will reportedly make a personal appeal to Ole Gunnar Solskjaer when he returns from holidays to let him leave Manchester United this summer, according to reports.

The Frenchman, who returned to Old Trafford in 2016, refuses to rule out the possibility of leaving United this summer after revealing he is considering “a new challenge”.

Both Juventus and Real Madrid have been linked with moves for the 26-year-old, but United are not actively trying to sell the midfielder and will demand top dollar if he is to move on before the new season begins.

The Mirror claims that the Red Devils have put a £150m price tag on Pogba.

Steep but the club must ensure they make profit on their most valuable asset right now.

According to The Sun, there is a meeting arranged between Pogba and Solskjaer once they all return from holidays for pre-season preparations. That’s when the France international will apparently request to leave Old Trafford because the report suggests he wants the situation to be resolved before United’s first pre-season game on July 13.

Moreover, Real Madrid boss Zinedine Zidane is said to be open to offering Isco as part of a potential deal.

I’d take the hands off them in a heartbeat!