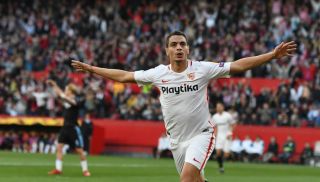 Manchester United have been linked with a move for Sevilla striker Wassim Ben Yedder as a potential replacement for Romelu Lukaku.

Many Reds will remember when the Frenchman turned up at Old Trafford and netted two to knock Jose Mourinho’s side out of the Champions League in 2018; Ben Yedder was clinical in dumping United out that day.

Now, according to La Colina de Nervion, United have an agreement in place to sign the 28-year-old this summer.

With a rumoured release clause of just €40m, this is surely a no-brainer deal for United to complete, especially if Romelu Lukaku gets his desired move to the Serie A.

Ben Yedder contributed to 41 goals in 54 appearances for Sevilla last term (whoscored), and can act as a supporting striker bringing the whole team into play, as well as being lethal in front of goal.

Solskjaer lacked clear goal-scoring instinct last season as the campaign ended in a whimper. Ben Yedder’s clinical nature in front of goal can take the pressure off the inconsistent Marcus Rashford as well as players such as Jesse Lingard and Daniel James in United’s attack.

The striker’s age should not be a problem for Solskjaer. Yes, it is clear that the transfer policy is young, homegrown talent, but the Reds must also have balance with proven quality. The Frenchman has proven himself in La Liga over a number years now and it would be a case of now or never to sign the striker.

Mason Greenwood is another striking option for Solskjaer, but the youngster would perhaps benefit from a loan spell in the Championship to gain invaluable regular first-team football.

Ben Yedder is a ready-made goal threat who seems perfectly suited to the Premier League. This is a deal that would be perfect to help solve goal-scoring problems, and would cost just a fraction of the price demanded for Romelu Lukaku who looks set to leave this summer.