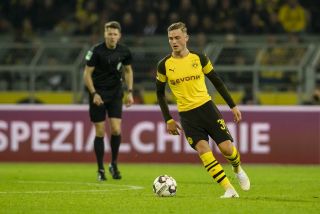 The Sun claims Liverpool, Manchester United and Arsenal are all interested in Larsen’s signature.

The Danish forward enjoyed a breakthrough season in 2018/19 similarly to team-mate Jadon Sancho, who was targeted by Manchester United before they finished sixth in the Premier League and lost out on the Champions League places.

Larsen is only 20-years-old but has made 30 appearances for Dortmund scoring three goals. He is already a senior Denmark international after getting his first cap in March.

The Sun’s report goes on to claim Dortmund snapped Larsen up from under the noses of Everton, when he was a 16-year-old at Lyngby. Liverpool boss Jurgen Klopp was still in charge of the Bundesliga side at the time, so he will have his contacts working in full flow if the Merseyside club are serious about a transfer.

There’s no real insight on United’s interest – we’re just name-tagged in the report, so I’m questioning whether this story has anything to it.

I mean, all of a sudden this kid has Liverpool, United and Arsenal chasing him. It’s June and I honestly haven’t seen his name mentioned anywhere until this morning.

But we’ll see what happens as we always do!