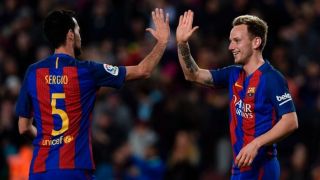 Sport claim that the Reds have already had a €35m offer for the Croatian rejected, with the Catalan giants ready to hold out for €50m to sell the 31-year-old.

Ole Gunnar Solskjaer needs at least two midfielder’s this summer, and it is no surprise to see the club linked to Rakitic who has established himself as one of the household midfield names in European football.

NEXT:Man Utd have ‘everything agreed’ for transfer of €40m Sevilla striker

Rakitic has won all there is to win with Barcelona, including the Champions League, and at 31 you would think this signing is not unattainable.

However, surely Rakitic’ age is a concern for Solskjaer, who looks to be targeting young home-grown talent this summer following the deals for Daniel James and Aaron Wan-Bissaka. Rakitic would be an expensive option with only a few years of service, but has proven his quality at the highest level.

Meanwhile, Don Balon report that Italian champions Juventus are also looking to sign Rakitic.  Juventus could be a more desirable destination for the Croatia star given their squad stability and Champions League football.

Even if Rakitic does not move to Old Trafford, the Reds must strengthen in midfield and Sporting Lisbon captain Bruno Fernandes could be the perfect additions to help solve the creative problems in the centre of the park.