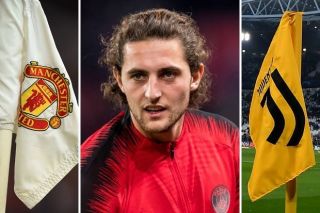 Juventus are set to complete the signing of Adrien Rabiot on a Bosman after agreeing personal terms with the midfielder, according to Sky in Italy.

The 24-year-old will join a new club on a free transfer when his Paris Saint-Germain contract expires on June 30.

Rabiot was linked with a move to Manchester United, but is now expected to sign a four-year deal at the Allianz Stadium.

This comes as a blow for Ole Gunnar Solskjaer and his transfer plans because United need to sign two decent midfielders this summer, and you won’t find too many bargains like this again. Especially after losing Ander Herrera to an expiring contract.

This will come as Juventus’ second signing of the summer after sealing a deal for Arsenal’s Aaron Ramsey, making it two midfielder and there’s still speculation over Paul Pogba returning to Turin.

But Rabiot has not played a game for PSG since December after refusing to put pen to paper and being subsequently dropped from the squad. Obviously, there’s more to it than that but they’re the foundations of the story.

It must be disappointing for Rabiot to leaving PSG under a grey cloud after emerging through their academy. He won five Ligue 1 titles, four French Cups, and five League Cups at the Parc des Princes.