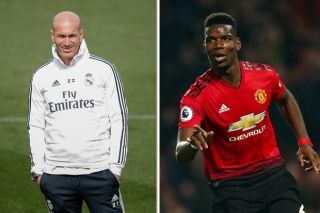 According to The Mirror, Real Madrid are willing to spend up to £150m on Paul Pogba this summer.

The Spanish giants have already made a number of summer signings – including Eden Hazard, Luka Jovic, Eder Militao, Ferland Mendy and Rodrygo – but they’re still prepare to bid quite high on Pogba.

Marca claims Real Madrid have pulled out of the race for Tottenham playmaker Christian Eriksen, with Pogba set as their primary target. Zinedine Zidane is said to be a big fan of the French midfielder and wants to work with him at the Santiago Bernabeu.

Pogba made his intentions clear with those comments and have never once made an attempt to quench rumours linking him away from Old Trafford.

But it’s not worth worrying about… Pogba doesn’t exactly cut the mustard most weeks, so he’s replaceable as far as United should be concerned.

There are players going for less that would be a lot more suited to United and you just know if Pogba leaves for Madrid that he will be a big hit in Spain.

It could be the move both parties need.