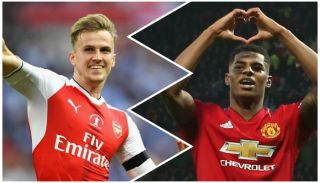 It resulted from a coming together with Rashford at Old Trafford in December, with Holding rupturing the anterior cruciate ligament in his left knee. Then he was ruled out for the remainder of the 2018/19 season.

Holding says there are no hard feelings between him and Rashy, who sent a text to the Arsenal centre-back following the accident.

“Marcus text me when the [extent of the] injury came out,” Holding told Arsenal’s official website, as quoted by Sky Sports.

“He just dropped me a text and just said, ‘Hi mate, sorry to hear about the injury, I didn’t mean it in any malicious way’.

“I didn’t take it as a personal attack on me, it’s just football. I just replied to him like, ‘Yeah mate, don’t worry about it, it’s football, you didn’t even make a tackle, you just sort of ran into me, there’s nothing in it, I’m not going to be judging you off that’. I’ve got nothing but respect for him and just wished him the best for the season.

“It wasn’t until a few nights when I was sort of in bed and on FaceTime to my girlfriend and just talking, and then thinking about it more, and then you sort of realise how long it’s going to be and you’re not going to play football, or kick a ball for three or four months.

“But yeah, that’s what it was and then it was just about a long road to recovery basically.”

We knew already he didn’t mean it in a malicious way, but he was still doing his best to check on a fellow footballer.

Now there’s a big season ahead of Rashford with expectations rising in terms of his goals return each campaign as United need to find a 20+ goal per season striker, especially if Romelu Lukaku moves to Italy.

The Belgian looks to be edging closer to Inter by the day, but the two clubs have yet to find an agreement. It was reported by The Sun on Friday that the Serie A giants will prepare for Lukaku bid by flogging Joao Mario and Dalbert for £40m.