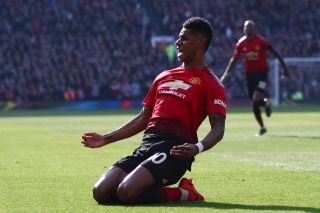 We welcome the news that Manchester United are confident that Marcus Rashford will sign a new long-term contract at the club.

The Daily Mail report that the striker will put pen to paper before the team leaves for Australia on pre-season tour.

Talks between the 21-year-old and United must be progressing well with Rashford set to commit his future to the Old Trafford club, after striking deals to sign Daniel James and Aaron Wan-Bissaka this summer.

Ole Gunnar Solskjaer looks set to build his United team around young players. They must now show the hunger and want to take the Red Devils back where we belong.

According to the Daily Mail, Rashford is in line for a ‘bumper pay rise to around £200,000-a-week’ with two years still to run on his current deal.

If Romelu Lukaku leaves for Italy, a move heavily touted by the press all summer, the young England forward will become United’s only recognised striker – unless Solskjaer wants to dip into the market for a top goalscorer.

That’s something Rashford has yet to become, so the Norwegian coach would be naive to go into a new season with just the one striker, who has not proven he can be a 20+ goal per season hitman.

Of course, it’s early days in Rashford’s career and he could become a lethal finisher yet but Solskjaer would be taking a risk with him being the only real option up front.

There’s Mason Greenwood too, who I think we’ll see a bit of next season but again he’s probably not reason for such responsibility. It would be better to ease him in with some game time here and there.

Like Greenwood, Rashford is still viewed as the future of Manchester United and that’s why he is likely to get a ridiculous high salary in his next contract. Hopefully he builds on what has already been a remarkable story of a local boy coming through the youth academy.

Contrary to reports, @utdreport claim the Telegraph has stated that Rashford could earn as much as £250,000-per-week on his new deal, as noted below:

Rashford is close to agreeing a new five year contract with #mufc. He will earn around £250,000 a week. The club hope to announce it before the pre-season tour #mulive [telegraph]