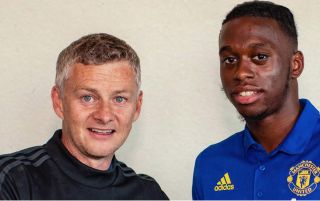 Patience was required in the process of making the transfer a reality, but we finally got our man to lead from right-back for the coming years.

It’s been years since United have a right-back the manager was happy with… Antonio Valencia was never a full-back, Matteo Darmian went from promising to a walking disaster, and Ashley Young should never play a match in the role again.

The fact Ole Gunnar Solskjaer wasn’t willing to start Diogo Dalot ahead of the average options he had towards the end of last season gave us the idea he doesn’t have the young Portuguese defender as part of his future plans. But he shouldn’t forget about him completely – there’s potential in the kid, he just needs time on the pitch.

Anyhow, enough about them and more about the new guy.

Speaking to ManUtd.com in his first interview with the club, Wan-Bissaka spoke about being excited to finally have the deal over the line: “Yeah I am excited to have finally signed for this team. Every kid wants to play for a team like this. I am grateful and it is an honour to represent this club. I think I will improve every step and learn different things around new team-mates. I think Man United is a big club, a big family, a big fan base, and I think they all stick together and are so tight together.”

Truthfully, Wan-Bissaka probably doesn’t even know what he’s saying during any of this interview. Just sheer excitement with the news he’s now a Manchester United player.

He’ll have to pinch himself for a while, every so often.

AWB also went into detail about what it was like training with ex-Red Wilfried Zaha at Crystal Palace.

“Yeah that is when I realised my actual strengths, from playing against him. It was not easy and it was always a challenge, but at the same time it helped me and made me realise what it is to play against players like him in the Premier League.”

Oh, and how he got the nickname ‘Spider’.

“The Spider’ is about the range and length of my legs when I’m lunging to tackle the ball. That’s where the nickname comes from.”