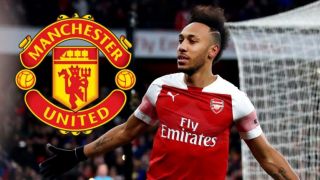 Arsenal will listen to offers for reported Manchester United target Pierre-Emerick Aubameyang – though The Sun claims a move to Old Trafford ‘seems unlikely’.

The same newspaper yesterday cited reports that the Gabon striker “said yes” to a switch to the 20-time champions of England.

While things are still downbeat at United, you can see why a move would appeal to Aubayemang. Arsenal seem unwillingly to back manager Unai Emery, a very good coach who will probably never get a real chance to take the club back to the top of English football.

For Ole Gunnar Solskjaer and the Glazers, the jury is still out and probably will be over the coming two seasons.

There are conflicting reports too, with 90min claiming United are not interested in the 30-year-old goalscorer, who received the Premier League golden boot last term, scoring 22 times for the Gunners in his first full season.

Being pacy and a hitman, you can see why Solskjaer would want a player like Aubameyang rather than Romelu Lukaku. He would accommodate two quick wingers well and give United a boost in fast counter-attacking play.

After missing out on Champions League football, both Arsenal and United need to find ways to gain ground on their top six rivals.

And, selling to a direct rival won’t do that.

Arsenal fans will laugh at that knowing how Alexis Sanchez slumped following his move up north, but I’d use Robin van Persie as a perfect counter-argument to that. Aubameyang isn’t as good but I think he would have a positive impact at United.

They will have no problem finding a foreign club to sign Aubayemang if selling him is on the agenda.

Emery might be trying to raise funds by scarifying Aubameyang to sign Crystal Palace winger Wilfried Zaha, a pursuit made more difficult by the Red Devils striking a deal for Eagles starlet Aaron Wan-Bissaka.