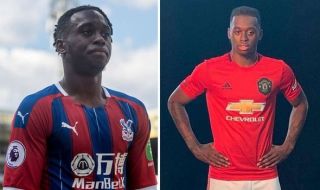 A number of outlets are reporting that Aaron Wan-Bissaka will wear number 29 at Manchester United, the same squad number he had at Crystal Palace last season.

The England under-21 international is on the brink of sealing a big-money move to Old Trafford and The Sun state that he will keep the same squad number following the transfer, with the official announcement still expected today.

An image of the star signing his contract also did the rounds on social media last night, which you can see below.

The Sun are reporting that AWB will join United in a deal worth £50m, which will also see the 21-year-old right-back earn £80,000-per-week.

Interestingly, the last player to transfer from Crystal Palace to Manchester United took the No29 shirt too.

But United fans will hope Wan-Bissaka proves to be a better signing than Wilfried Zaha, who flopped during his time at the club. He returned to Palace and was part of Roy Hodgson’s squad with United’s new signing last season.

That also puts less pressure on Wan-Bissaka’s shoulders that it’s not a number with a history of greats.