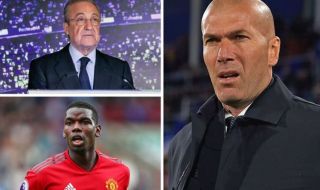 The Spanish giants have already secured a deal with Eden Hazard but it doesn’t sound like their raid on the Premier League has finished yet.

But it’s no wonder Zidane and Perez are at odds over Pogba. The France international has had a very mixed three years at Old Trafford and has struggled for a variety of reasons.

Pogba was United’s top scorer last season. For a midfielder we shouldn’t put our nose up at that but it’s not as if any of the strikers were firing in all cylinders.

Moreover, we all know he is capable of more.

According to the print edition of Sport, as translated by Sport Witness, Zidane is eager for Real Madrid to sign Pogba, while Perez is not fully convinced.

It remains to be seen what way this will go, but perhaps Perez owes it to Zidane after asking him back to fix the mess at Real? If his wish is to sign Pogba, then they really should back their new man to the hills and try get it done.

Perez will be the who makes the final decision, although he will want to avoid upsetting Zidane this early in the job.

It is also noted that United don’t want to sell Pogba this summer.