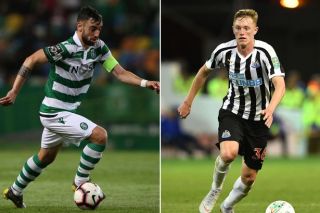 Manchester United are targeting three more signings this summer according to reports, following moves for Aaron Wan-Bissaka and Daniel James.

Evening Standard journalist James Robson claims that the Reds are closing in on three more players before they fly out for their pre-season in Australia next week.

Sky Sports reported earlier that Wan-Bissaka has passed his medical and signed a five-year-contract ahead of his imminent Old Trafford move.

Sean Longstaff is one name in the report that Solskjaer is confident of signing; United believe that the 21-year-old midfielder is ready to leave boyhood club Newcastle for Old Trafford this summer. The Metro report that it will take a bid of around £30m to sign the player who has been likened to Michael Carrick following a flurry of impressive midfield performances at St James Park.

Robson also believes that the Reds are interested in securing a deal for Sporting Lisbon midfielder Bruno Fernandes. Fernandes, 24, has been linked with a move to Old Trafford all summer and is a player lots of fans have insisted on the club signing.

Fernandes’ agent Miguel Phino is said to have been in the UK over the last few days looking to seal a transfer to a Premier League side. However, Liverpool and Tottenham are both reportedly not in the race to sign the midfielder which leaves United a clear run to complete the transfer.

The report states that Solskjaer wants to sign two midfielders this summer, with the departure of Ander Herrera and the rumoured exit of World Cup winner Paul Pogba who has openly expressed his desire to leave Old Trafford to seek new challenges.

United need at least three more signings this summer, but it is highly doubtful they can get three deals over the line in such a short space of time given the length of time taken to negotiate the transfer of Aaron Wan-Bissaka.