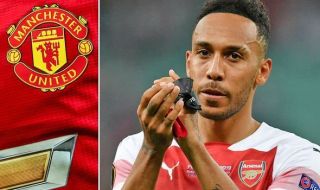 Sigh… this is just one of those you know has zero substance to it.

Reports claim Manchester United have identified Arsenal striker Pierre-Emerick Aubameyang to replace Romelu Lukaku should the Belgian leave this summer, which looks inevitable at this point.

While I wouldn’t say no to the Gabonese striker, this doesn’t seem like it’s worth talking about knowing Arsenal wouldn’t agree to a deal.

But Tuttosport have thrown a twist into the works by suggesting Aubameyang has ‘said yes’ to the idea of joining the 20-times champions of England.

Aubameyang isn’t actually quoted in the piece, so how does that work?

He won the Premier League golden boot last season with 22 goals and could have a similar impact to Robin van Persie if he made the wise decision to ditch Arsenal for United.

However unlikely the report is, United signing a new centre-forward would depend on the future of Lukaku.

The Belgium international has been linked with a move to Inter all summer. He even expressed his admiration for their newly appointed manager, Antonio Conte, who he labelled the best manager in the world, as reported by ESPN.

Whatever happens this is a story the clickbait merchants will agree until the transfer window shuts. Buckle your seat belts.