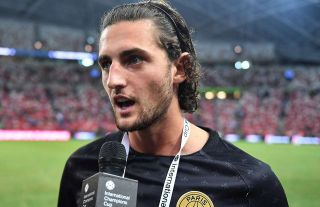 The agent and mother of Adrien Rabiot has denied that Paris Saint-Germain have made a last ditch effort to keep him at the club.

She adds that the French midfielder will be leaving the club this summer which will excite Manchester United fans knowing he will soon be available on a Bosman.

Reports have previously linked United with Rabiot, but there is said to be interest from Italy too with Juventus looking to add the midfielder to their already incredible squad.

Now that staying at PSG has been ruled out, it’s time for United to step up their interest in Rabiot if it’s genuine.

Ole Gunnar Solskjaer will be looking to replace Ander Herrera who will leave the club in the coming days once his contract officially expires. It is expected that he will join PSG, so it could work in more ways than one for the two clubs.

Even with Herrera in midfield it was still pretty noticeable that other teams could beat United in the midfield area – while the Spaniard was being partnered by Nemanja Matic and Paul Pogba. That’s why most fans are calling on Solskjaer to add at least two midfielders to the squad this summer.

Newcastle’s Sean Longstaff and Sporting playmaker Bruno Fernandes have both been prominent in the gossip columns and potential arrivals.

Veronique, Rabiot’s mother who also acts as his agent, has insisted that departure is still very much on the cards.

“I want to make a formal denial,” she told RTL.

“I read absolutely everything. That Adrien had an appointment with Leonardo [sporting director] that he did not honour. Or that I received an offer to extend his contract from Leonardo that I refused to raise the auction.

“This is absolutely wrong. There is not the slightest discussion between Leonardo and I.

“I had him on the phone once since he came back and we greeted each other with respect. He’s a smart person. There was no offer and there will not be any.

“You know, in football, we’re very superstitious, and it’s better to say as little you can until nothing is done.”

The difference now is Juventus have Champions League football next season. United don’t.

That could come into Rabiot’s decision but hopefully he will see the bigger picture and what Solskjaer is trying to do as manager.

Rabiot passed comment on his future last month, as quoted by Manchester Evening News: “I’ve spoken with Juventus, it’s a great club where everyone would like to play. I like Italy so much, it’s wonderful here. A demanding season awaits me. At Juventus? Juve watched me and we talked about it, but I can’t say anything.

“Manchester United? It’s the same as last year, I have to decide. I’m on vacation for now. Soon you will know.”