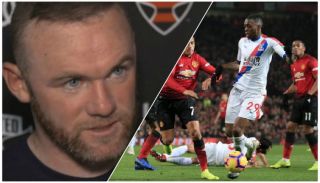 Wayne Rooney has some valuable advice for Aaron Wan-Bissaka ahead of the 21-year-old’s transfer to Manchester United from Crystal Palace.

Wazza knows what it takes to make such a big move at a young age, so hopefully Wan-Bissaka takes the advice on board and wants to become the best right-back in the world one day.

NEXT: Some Man Utd fans want club to sign PL ace who continues to impress at AFCON

According to Manchester Evening News, United have agreed a deal worth up to £50m with Palace for the full-back and he is due to have a medical today in Manchester.

Both players are youth and have plenty of potential to make it at the top. It proves that Ole Gunnar Solskjaer is approaching the job with a special approach, only signing players that fit his profile as a manager.

Ahead of his move, the youngster has been handed some advice by United’s all-time record scorer.

“Enjoy it, play with no fear,” Rooney advised Wan-Bissaka while speaking to Sky Sports.

“Go and do your best. I’m sure he’ll be fine and I’m sure the coaches will be telling him all this.”

Rooney scored the game’s only goal when DC United took on Orlando City in the early hours of the morning.

Striking from his own half, Rooney added to his tally with an effort from distance.

It was one of his best goals for DC United.