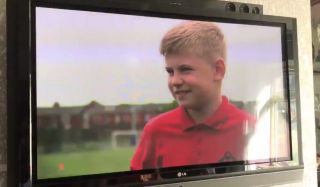 A young Manchester United fan has gone viral after admitting he doesn’t like any of the current players at Old Trafford.

The kid in question talks about football and wanting to be a future star in the game before revealing he’s a United fan.

While the young lad shows admiration towards current manager and ‘legend’ Ole Gunnar Solskjaer, he is not a fan of any of the current players, as he slams them all as ‘rubbish’.

The team will need to improve to get his blessing again, but the kid isn’t wrong. It’s hard to watch your team and thinking none of the players care as much as they should.

This kid was just interviewed live on ITV News and he was asked about who he idolises at Manchester United… Well, just listen to his reply 😭 pic.twitter.com/JSdWNjFT2Z

We want hungry young players who always want to improve even though they’re playing at the biggest stage representing United.

That can’t be enough, they must want to win constantly at all costs.

The current crop settle for second best and are happy as long as they get paid. It’s not easy to find a connection with that as a fan.